Increase the Effectiveness of Your Exhaust Fan 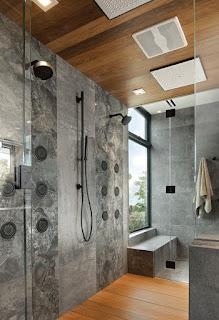 If you are looking to renovate a bathroom or are building a new one, something that can often get overlooked is the exhaust fan placement. While the shiny fixtures and fancy tiles can and probably should get most of the attention, taking a few minutes to determine the best place to install an exhaust fan will have years of benefits – maybe even longer than the shiny things.

First, make sure an exhaust fan is being installed. We have spent plenty of time in our past blogs exploring the benefits of utilizing an exhaust fan and the dangers of not having one. It is critical that one is installed. Having a fan anywhere in the bathroom is miles better than not having one, but we want to concentrate on maximizing its effectiveness.

It sounds simple, but you want to locate the exhaust fan as close to the source of the most contaminates as possible. When we talk about contaminates in a bathroom setting, the biggest one is moisture. While odors are also a concern, moisture is what will cause the most damage if not properly mitigated. With this in mind, the best place for an exhaust fan is generally going to be inside the shower or right over the tub. This puts the exhaust right at the source.

Great – that was easy now we can get back to the shiny things and the fancy tiles. Well not so fast. In order for the exhaust fan to be installed inside a shower or over a tub, it has to be approved for that use. Not all exhaust fans are – especially if you have one that has a heater function to it. You want to make sure the fan says “UL approved for installation over a tub or shower” or “certified for wet locations”. If it is not and water hits the fan, it could cause a short or worse. If you have a fan that is not approved for wet locations, it can still be used, but not directly over the tub or shower. In this case, you want to place the fan as close to the shower as possible so it catches as much of the moisture coming out from the shower as it can. The further away from the shower, the less effective it will be. At that point, you will need to look at using a fan that is actually over powered for the room, which can cause other issues.

So far we have looked at a “typical” bathroom. In some cases, the shower and the toilet are separated – especially in larger bathrooms. In this situation, you might want to look at installing two exhaust fans. A smaller one to handle the toilet and a larger one to handle the moisture. This allows you to place exhaust fans at the two main sources of contaminates in the bathroom and control them independently.

For more information or to see the line of Air King bathroom exhaust fans, visit www.airkinglimited.com
Posted by Air King Ventilation at 9:34 AM